Yesterday did not go as planned

Lions and Tigers and Bears–Oh My! (Not quite)

Yesterday did not go as planned.

The Jacksonville Zoo had a $5 admission sale going on. 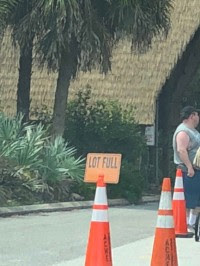 That would have been great except the entire city decided to show up. By the time we got there—we live a good hour away—not only were there no parking spaces inside, the entire block outside the zoo was lined with cars. We found a spot a little over a mile from the zoo, but by then Yumi, my wife, decided visiting IKEA would be more “educational.”

Still, the kids (and I’m including myself in that category) did manage to get some very unhealthy pizza and slightly unhealthy frozen yogurt. So, it wasn’t a total waste. (The image to the left is my daughter, Megumi and yours truly.)

As you may know, my Kickstarter campaign ended (yeah!) and don’t worry, I won’t do another one. I have been hard at work with edits and audio recording. Except for yesterday. I was hard at work eating that frozen yogurt yesterday.

What about new stuff, Clay?

Agora #8 is in its final draft stage and #9 and #10 are still only outlines (better than scribbles on the back of a napkin but not much better). In other words, it’s getting “there.”

I hope to have some more concrete news for you next time! Until then, say goodnight, Gracie.