The other day I wanted to expose my son to some high-brow entertainment. You know, I wanted him to learn to appreciate the finer things in life–higher culture. Things like Mozart, Shakespeare, and of course, The Little Rascals. 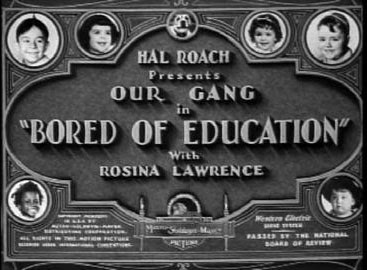 So, we sat down to watch an episode of The Little Rascals called “Bored of Education.” It was so titled because the little darlings were, you see, bored of education.

It is the first day of school, and the kids are suffering now that summer has come to an end. They march up the school steps with a pitiful resignation. But! Never fear: Spanky has a plan. He has Alfalfa pretend to have a toothache and for realism, Spanky stuffs a balloon into his friend’s mouth.

Meanwhile the dastardly antagonist (Miss Lawrence, their teacher) has ordered ice cream to be brought for the kids to enjoy. But, you see, Alfalfa and Spanky only learn of this development once excused from school, Alfalfa due to his “toothache” and Spanky to walk his poor friend home.

To not waste much more pixel ink on this fascinating story, here is the summary: our heroes learn of their teacher’s plan and return to make amends. Their only hope is to convince Miss Lawrence brave Alfalfa is “all well now.” In order to prove themselves capable of eating ice cream, the crooner Alfalfa must sing, “Believe Me, if All Those Endearing Young Charms.”

Hearing Alfalfa’s flawless delivery, I immediately looked it up. This song was written by the Irish poet, Thomas Moore, and set to a traditional Irish air.

But, here is the fascinating story behind the poem/song. (And where the “real” culture comes to play)

It was said Moore’s wife, Elizabeth, refused to leave her room due to her face having been badly scarred by smallpox. She was convinced her husband would no longer love her.

Seated outside her bedroom door, he sang, in tones so soft and low, these lyrics:

BELIEVE me, if all those endearing young charms,

Which I gaze on so fondly to-day,

Were to change by to-morrow, and fleet in my arms,

Thou wouldst still be ador’d as this moment thou art,

Let thy loveliness fade as it will;

And, around the dear ruin, each wish of my heart

Would entwine itself verdantly still!

It is not while beauty and youth are thine own,

And thy cheeks unprofan’d by a tear,

That the fervour and faith of a soul can be known,

To which time will but make thee more dear!

Oh! the heart, that has truly lov’d, never forgets,

But as truly loves on to the close;

As the sun-flower turns on her god, when he sets,

The same look which she turn’d when he rose!

The story goes that after the poet finished singing, the door opened and the husband and wife were reunited.

You simply must take five minutes and watch Jenny Oaks Baker’s video of her playing this song. It is truly beautiful:
https://www.youtube.com/watch?v=wmxS8uSB7Tw