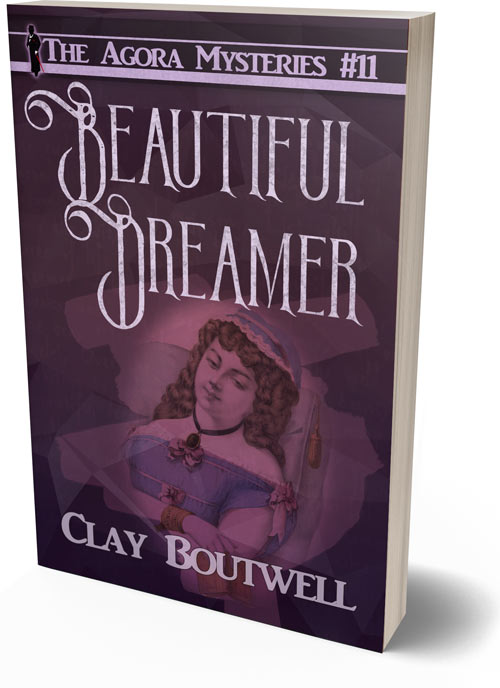 Next week, I will launch the eleventh Agora mystery! It is called, Beautiful Dreamer. Here is the first chapter as text as well as the audiobook read by yours truly.

After the horrific events of the last letter, I would like to take the opportunity to recall an episode unrelated to my family situation, something that occurred before I had even met my dear wife.

One morning at my office, a consulting firm for several Boston banks and insurance companies, I found myself scanning a seemingly endless sheet of numbers, eyes glazing over from dreariness.

Being an actuary, I am often required to analyze such reports, dense with numbers, but rarely do I call such work tedious.

When considered from a certain perspective, the numbers, which the reader must understand represented the livelihoods of many unnamed individuals, came alive. The health of my client’s hard-earned savings and investments were dependent upon my ability to predict uncertain and unseen future events.

My work required both the exactitude of a high-level analytical mind and the flexibility of a creative problem- solving intuition. In fact, this strange marriage of the methodical and imaginative helped develop within me a peculiar insight into human behavior. I often employed this insight during my time with the Agora Society. It was, for me, an exciting and rewarding profession.

However, on that particular early May morning, the numbers were far from exciting and were certainly not coming alive in my mind.

I stood and stretched, intending to take a walk on the cool Boston streets to clear my mind when a uniformed constable entered and delivered a hastily scribbled missive from my friend and sometime colleague, Captain Barnwell. The note requested my immediate presence at the police station.

I gleefully handed the sheet of numbers to my frowning junior assistant, retrieved my coat and hat from the stand near the doorway, and accepted the constable’s kind offer of a carriage ride to the precinct.

Minutes later, I entered the building, but before I could turn toward the captain’s office, Lieutenant Harris stopped me with a firm hand.

Harris was a young man who had been instrumental in helping to close a number of troublesome cases in the past. The observant reader may remember the resourceful lieu‐ tenant from my communiqué, Eggs Over Arsenic.

“Mr. Brooke,” the lieutenant said with a soft voice. “The captain is in one of his, uh, moods today. Please tread lightly.” His utterly sober face was made slightly less serious by a friendly, yet meager smile. “Tread lightly,” he repeated.

Upon giving three raps to Captain Barnwell’s office door, my friend called for me to enter. His was a gruff voice, a voice that made me hesitant to obey, a voice that resembled my disappointed father’s upon discovering I had broken mother’s favorite vase. To this day, I shiver at the memory.

I looked back at the lieutenant across the room. As if to both confirm the seriousness of the matter and my helpless‐ ness in the outcome, Harris lifted his hands, cocked an eyebrow, and displayed that supportive yet impotent smile. After taking a deep breath, I opened the door and placed a cautious foot inside my friend’s office.

“Close the door and sit down,” the captain said sternly, a frown matching the gruffness in his voice.

Was I the cause of his irritation? Surely, this was the case as he had called me specifically. What had I done? I could not think of an offence. Close the door, he had commanded. Sit down, he had further said—not, please have a seat, my dear friend. To say I felt like a schoolboy called to the headmaster’s office would not be far off mark.

I complied with the captain’s command and sank into the chair facing his desk, hands clenching the ends of the wooden armrests with a nervous grip.

He also sat and, leaning forward, planted two solid elbows upon the felt blotter on his desk. Then, in an unexpected flash, his mustache jerked back, to reveal a broad smile.

Surprised by this affable exchange, I twisted my torso and gazed in the direction of an unseen Lieutenant Harris beyond the closed door, wondering what to make of the change in my friend’s attitude.

I returned my eyes to my friend whose mustache remained parted, still allowing that welcoming smile to break through its hairy prison.

“I was told you were in a foul mood.” I let out a breath of relief so strong I imagined it could knock down a building.

“Why, yes. Lieutenant Harris out there indicated you were perhaps in a bad way today. I’m glad to see he was mistaken.”

“Oh, not mistaken, but also not uncontrolled. I do it occasionally to remind everyone of the seriousness of our business. I can’t have the Boston Police Department become a rough and rowdy group of ruffians like the Agora Society, now can I?” He grinned again, somewhat more playfully. “Oh, before I forget, I ran into Rabbi Herschel the other day. He would like another chess match.”

“Of course, he would,” I said, adding a groan. This elicited a questioning glance from the captain. “The rabbi always wins. What is this matter of urgency?”

The captain leaned forward, elbows propped on the desk and instantly dropping the smile. The previous stern demeanor reappeared, and I had the sudden and horrific feeling I had not wholly escaped the headmaster’s wrath.

“It seems Otto Snelling has discovered a new hobby for himself.”

The schoolboy within me sighed with great relief. The summons was not related to me.

As I have previously confessed in multiple letters, the captain’s firm mustache when matched with his commanding voice and naturally stern appearance could induce confessions of horrendous crimes from even the most innocent of individuals.

“What would that be?”

“Operatic singing in the early hours of the A.M.” “Singing? Otto? Opera?”

The captain nodded thrice, once for each word.

“Four A.M. operatic singing. According to his neighbors, he is especially fond of Mozart’s Marriage of Figaro.”

I knew Otto’s interests were varied, and he was fond of expressing himself loudly, but opera? I had no idea my friend and fellow Agora Society member, Otto, took the slightest interest in the musical arts. His conversation usually limited itself to the latest chocolate concoction by Mr. Louis Dufour of Dufour’s Sweets or on his opinion regarding the quality of a recently acquired bottle of brandy.

“Indeed. Well, this request, as you can no doubt imagine, comes from his neighbors.” I nodded, but the captain, perhaps sensing his meaning had not been fully appreciated, hastily added, “Neighbors on both sides of his house and across the street.” The captain pursed his lips and crinkled his forehead. “Would you mind asking him to hold off his singing until at least seven in the morning?”

I could easily imagine the high-spirited Otto intoning with great gusto, but the image of an early rising opera singer did not at all fit his image.

I suddenly had a flash of remembrance that made my hands sweat. Could I have been an unwitting accomplice?

“I shall go to him immediately. I actually have a separate matter to discuss with him,” I said, thinking of a speaking- trumpet I lent him a few weeks back. Upon hearing the captain’s complaint, I surmised Otto’s intended use for it and immediately regretted loaning him the item. His excuse for wanting the sound-amplification device must have been to test the acoustics of various rooms in his house. I now suspected the borrowed instrument had aided Otto in becoming the infamous operatic morning reveille for the neighborhood.

I stood to leave when the captain held up a hand.

“Please Carl,” he said. “There is one more thing, the real reason I had you called.” Captain Barnwell smiled, the ends of his mustache lifting. “It’s a little puzzle I thought you might enjoy.”

As I sat back down, a loud knock turned our focus to the door.

“Ah, that would be Sully. No doubt, he will explain further.” He faced the door and spoke in a louder voice. “Enter.”

The door swung open and Sergeant Sully, a kindly forty- something Boston native, stepped into the office. As a dili‐ gent worker, he produced results, but the friendly Sully had a tendency to gab on incessantly about unnecessary topics. His large frame blocked all but the head of Lieutenant Harris, whose curious and sympathetic eyes peered in, surely to assess the carnage.

“Sir, the old lady was correct. A body was on the premises.”

The sergeant leaned in, eyes slightly bulged, and voice lowered to conspiratorial levels.

“But,” he said, “you’ll never guess where the body was found.”

The sergeant smiled, straightened his posture, and lifted his chin expectantly as if inviting the captain to play along.

Captain Barnwell crossed his arms and pressed his back against his chair. In silence, one eyebrow raised in unspoken demand, clearly expressing a distaste for being made to interject even a single syllable to keep the flow of the conversation going.

“Sorry, sir,” Sully said, hand sheepishly rubbing the back of his neck. “The body was found on the roof of that three-storied apartment block. The roof. Not only that, but the sole access to the roof is a perfectly vertical ladder on the second floor.”

Sully presented a piece of paper to the captain. “It’s all here in my report, sir.”

Accepting that, the captain shook his head and turned his attention to me.

“Well, Carl,” Captain Barnwell said, allowing some of the previous levity to return. “Here’s a pretty pickle. An hour ago, we were visited by a lady well-advanced in age. This lady presented to Sergeant Sully a bloodied knife and proceeded to confess her involvement in a murder. Naturally, it caused a bit of a stir when the old lady pulled out the knife from her large bag. None of my officers were expecting it, you see.”

“She confessed to murder?” I asked, looking from the captain to Sergeant Sully.

“Yes,” the sergeant said, perking up. “Mrs. Emma Martinez, she calls herself. She told us the body would be found at a certain address and, as far as that goes, she told the truth.”

“Just one little problem with her confession,” the captain said with a grim smile.

“She couldn’t have done it.”