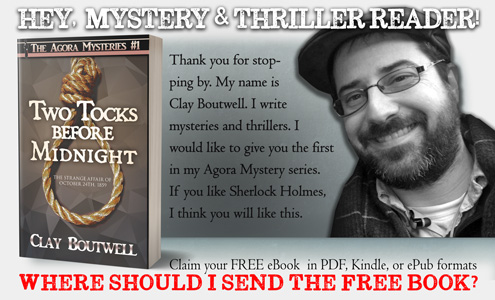 Enter your email address to get your free eBook delivered to your inbox. You’ll also be added to my First Reader’s Group and you’ll be the first to know the next time I have something new or something free!

I value your privacy and would NEVER spam you. But I will send you a free book!
By downloading Two Tocks before Midnight, you’ll join Clay’s free First Readers newsletter and get occasional updates, discounts, and freebies from him. Of course, you can unsubscribe any time (there will always be a big “unsubscribe” button at the bottom of each email), but we hope you will stick around!

Still not sure it’s worth FREE?
Here’s the beginning:

I have never been fond of sentimental ramblings so I will keep this short. Indeed, if not for the insistence of my friends, I would just as soon let the matter slip away with the sands of time. But repeated pleas from the curious and the morbid alike compel me to share with you the strange affair of October 24th, 1859.

I can’t even say with certitude that the events of that date occurred exactly as I remember them. As time passes, so do the minute and myriad details; rough edges are made smooth and the inevitable romanticizing of the past plays havoc with true fact.

Still, as I am a Christian and an honest man, what follows is as accurate as my fallible mind can relate.

Nearly two score years separate us from those days and that night in particular. I, alone—so I am told—am survived out of the lot of us.

Our society had a dozen members at its zenith.

Each brought to the group his individual talents and ambitions. Mine lay in ancient Near Eastern languages. To give a brief sampling of the others pertinent to our discussion, Dr. Christopher Harding was an expert in papyrus, cuneiform, and writing methods of antiquity; Mr. Thomas Phillips was skilled at ancient weaponry; and of course there was Mr. Charles Tock who could converse in thirteen languages and read five more. Charles Tock and Thomas Phillips are of special interest to our story.

Before I begin about the events of that night, I think it important to share a little more about our group.

We called it the Agora. It was to be an open marketplace to foster ideas for the betterment of man. That was the name; the structure, however, was modeled after Dr. Franklin’s Junto society. In a show of hubris that even today causes me to cower with embarrassment, our charter set forth the goal of leaving to the world a greater legacy than that of the good Doctor. Indeed, we had the mind to compete with the man who “took lightning from the sky and the scepter from the tyrant’s hand” as Turgot put it. He surely laughs at my friends in the hereafter. There are times I fear I hear his laughter echoing in my dreams, beckoning for me to come.